Shuttle Atlantis is cool, Felix Baumgartner can jump in a lake 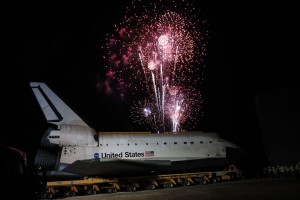 Space Shuttle Atlantis arrived at the Kennedy Space Center Visitor Complex on Friday after a day-long parade through the streets of America’s rocket ranch that concluded with an unforgettable evening fireworks display.

Eight years after the decision was made to end the Shuttle program, at long last, Enterprise, Discovery, Endeavour, and now Atlantis — all are delivered to what can only be described, for better or worse, as their final resting place.

There’s still plenty of work ahead to get Atlantis ready for public display at the Visitor Complex, and when completed and opened in July of next year I have no doubt we’ll be able to claim bragging rights as having the best of the nation’s orbiter exhibits.

Atlantis will be mounted off the floor at an angle, wheels up, it’s payload bay doors open, appearing just as it did when it flew in space and racked up more than 125 million miles during 33 flights between 1985 and 2011, when it was launched on the program’s final mission.

It’s going to be an impressive site that will thrill visitors to the space center for years to come.

Among all of us who have been so close to the Shuttle program, seeing Atlantis there will continue to evoke those bittersweet feelings that combine our pride and love of this grand lady of space with the sense of disappointment and sadness that perhaps it all ended too soon; that we should have had a replacement vehicle ready to go to continue carrying our astronauts into space from our own shores, and not from the foreign steppes of Kazakhstan.

Many of those bittersweet emotions were expressed by the folks that gathered at KSC on Friday to watch Atlantis pass by. But mostly, it seemed to me, the overwhelming sense coming from the crowds who were there was of excitement and support for our space program and its future.

Once again, as we saw with Discovery in Washington, D.C. and with Endeavour in Los Angeles, there is more public support for our space program, more instinctual desire present to explore strange new worlds, than the polls and many of our elected leaders would have us otherwise believe.

I think this was shown even more strongly on Friday when you consider that many of the thousands who watched Atlantis pass by did so as part of their vacations to Central Florida and had paid admission to the Visitor Complex to be taken by special bus to an exclusive viewing area where they could meet astronauts and see displays showcasing what the future of human spaceflight will look like.

Not to change subjects here, but Atlantis’ move and all the pomp and circumstance that went with it is something I wish space jumper Felix Baumgartner could have seen.

A few weeks after jumping from a balloon 24 miles up and becoming the first man to break the sound barrier while falling, the daring Austrian made some disappointing comments about space exploration a few days ago during an interview with the British newspaper The Telegraph.

You’d think a guy who has such a spirit of adventure about him, and who to secure his own place in history relied on so much space-age technology that came directly or indirectly from the space program, would just naturally embrace a pro-space mindset.

You would be wrong.

Here’s some of what he said:

“A lot of guys they are talking about landing on Mars. Because [they say] it is so important to land on Mars because we would learn a lot more about our planet here, our Earth, by going to Mars, which actually makes no sense to me because we know a lot about Earth and we still treat our planet, which is very fragile, in a really bad way.

“So I think we should perhaps spend all the money [which is] going to Mars, to learn about Earth. I mean, you cannot send people there because it is just too far away. That little knowledge we get from Mars, I don’t think it does make sense.”

“That is tax money,” he added. “People should decide ‘are you willing to spend all this money to go to Mars?’ I think the average person on the ground would never spend that amount of money – they have to spend it on something that makes sense and this is definitely saving our planet.”

Do we really need to break down his comments? It doesn’t make sense to study Mars because we’re mistreating our own planet? Felix, do you think we might just possibly learn how to treat our planet better by also understanding how Mars became a planet-sized desert in the first place?

It doesn’t make sense to send people to Mars because it is too far away? Really? Well Felix, it wasn’t so long ago that people were saying you were crazy to try and take a balloon as far up as you did and jump. For that matter, it wasn’t so long ago that people said we couldn’t fly across the ocean because it was too far, let alone travel to the Moon.

And don’t get me started on the whole deal about spending money in space. The only money that has ever gone into space has been the few dollars and coins astronauts have taken up as souvenirs. The rest of it has all been spent right here on Earth.

Oh, and although you are an Austrian and should really be more concerned about where your country is spending your tax dollars, I would remind you that while billions of dollars are in fact spent by NASA each year, and yes it’s more money than any of us will ever see on our own, the amount is still a drop in the bucket for such a rich nation like ours. And even at that, unfortunately NASA’s budget is still less than Americans spend each year on such things as cosmetics, junk food or professional sports.

So, Felix, I’ve changed my mind about you. A few weeks ago I applauded your feat of daring do and the company that supported you. Now, not so much.

All I can say is I hope that the next time you plan to make a big leap from on high, you might consider parachuting into the Kennedy Space Center Visitor Complex next year so you can see Atlantis in all her glory, meet some of the folks who work here, and perhaps become more educated, enlightened and excited about the value of space exploration.

Otherwise, as far as I am concerned Felix, you can just go jump in a lake.