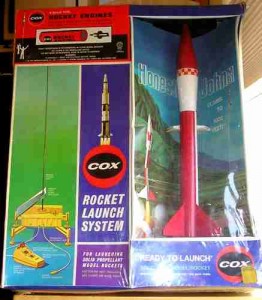 Although not the actual one, this is a picture of what my Cox Honest John starter kit looked like.
Like your first love, you never forget your first model rocket launch. And therein hangs a tale, which among my friends and family is known as the Honest John story.

I was about 11 or 12 years old. My neighbor friends had started flying model rockets and since I already was a true steely-eyed-missile-man-want-to-be, I thought that looked like fun.

By that time, during the late 1960s and early 70s, Estes was already the king of model rockets. There also was Centauri model rockets, which I owned; and MPC, which I didn’t.

But for my first rocket, since I also needed a launch pad, my heart was set on the Cox model rocket brand. Cox was already famous for their motorized airplanes and thanks to the Apollo program they put out a small group of plastic model rockets that came fully assembled and ready to fly.

I was sold on the Cox brand because their bright yellow launch pad was square, sat on four legs and reminded me of an Apollo mobile launch platform sitting atop pad 39A.

They offered a Little Joe 2, a Saturn 1B and a Saturn 5, among others. I coveted the Saturn 5, but it was a little too big for me to handle for my first rocket. However, their smaller Honest John rocket was a perfect starter. Even better, the Honest John, which by the way was an Army surface-to surface missile, could be purchased in a starter kit complete with a launch pad an box of engines and igniters.

I don’t remember exactly under what circumstances my parents gave me the starter kit. It might have been for Christmas or it might have been just one of those surprise presents my dad brought home from work every once in a while. In any case, I can assure you it was not during the time of year in Minnesota when you could go outside and launch model rockets.

So when I got it, I assembled the launch pad, put stickers and decals on the rocket, loaded it with its solid propellant engine and igniter and put it on display on the desk in my bedroom, waiting for that first day when the weather would be good enough to send that Honest John on a suborbital arc through space – or at least maybe a few hundred feet high.

Soon it was springtime and after staring at that rocket in my bedroom for hours and weeks on end I was impatient to get that Honest John into the air. Very impatient. Schedule pressure instead of safety impatient.

Where was legendary shuttle launch director Bob Sieck to straighten me out when I needed him?

The day soon came when the snow had melted, it was reasonably warm enough, and the skies were mostly clear. It was a little windy, but I could compensate for the wind by tilting the pad a bit so the rocket would fly into the wind and then drift back by parachute to land nearby.

Of course, that was my first mistake.

Generally speaking, for safety reasons, you’re supposed to use an A engine for your first flight of a new rocket. But I wanted to see this thing really fly, so without consulting anyone, or really informing anyone, I had loaded the rocket with a C engine.

Ignorant of the potential consequences of my actions, I hooked up the igniter, inserted my launch key into the controller, confirmed I had good power going to the rocket, and started my countdown as the blustery wind of a Minnesota spring day swirled about high wind

The red and white Honest John streaked away from the pad and shot straight up, flying fast and true and trailing the tell-tale smoke of a solid fueled rocket motor. Did I mention that I forgot to tilt the pad into the wind? Yeah, it flew straight up.

As planned, nearly out of sight, the engine ejection charge fired, the rocket split in two as designed, and out came the parachute. The Honest John was a beautiful sight as it slowly drifted toward the ground…and thanks to the high wind, more quickly toward the dense woods beyond what was now apparently a way-too-small athletic field surrounding my school.

Friends started running toward the woods even as the rocket disappeared into the trees. I remember my dad making a valiant effort to find it, even as I just stood there by my launch pad, shocked and dumbfounded. The notion that I might never see my rocket again began to dawn on me. And though I wanted to, I didn’t cry.

And no, we never did find it. The woods my rocket disappeared into years later were cleared and a shopping center with a Target is there now. I’d like to believe some bulldozer driver found it and my Honest John wound up with another little boy who would cherish it as his first rocket like I did.

As I look back at that day, I realize now that I had a learned an important lesson: When it comes to launching rockets, you always have to put safety over schedule.

So now, as a grown adult, I’m ready to try it again. I’ve purchased a Cox Honest John on e-bay, and it’s sitting on my desk right now ready to fly.

The launch could take place as early as next Saturday. I can assure you I will not be flying it with a C engine, and I will not push the launch button if there is even a hint of a strong breeze. So the Honest John story may soon have a sequel. I’ll let you know.